Tim Richards has a big week at the Bridge

The star of the show for the 10 race card on Tuesday was Yvonne Maxwell, with a perfect three from three for the day.

She took Petina, Calais Prince and Love And Rain for a rare Murray Bridge appearance, with all three chasers winning in comprehensive fashion. The most impressive of the lot was Calais Prince, who clocked a sizzling BOD 16.50, which was quicker than what the straight track professional in Arch Of Daisy’s ran on the day. It was a great day for Yvonne and her team, and hopefully we see her back for some more success.

Tony Nobes continued his really good run at the Bridge, with two winners for the day. The airborne Redeemer’s Gift tackled the 350m trip for the first time, but did it with ease as she went all the way in a slick 19.06. Spring Zoe then made it two the race after, with an all-the-way effort in 19.22, just defeating Nikita. Well done to Tony who is doing a good job with his team lately.

Tim Richards had a good day out scoring a double with Crush Your Enemy and She’s Driven. The first of the two in She’s Driven wasn’t given much of a hope in the market despite some unlucky runs prior, but won really well. She was able to offset box #7 with a good beginning, before holding off Helmet Giblet who was rocketing home late. Crush Your Enemy looked a tap in and won accordingly, with slick 19.08 win over the 350m trip.

Dog to follow: Emerley Bruce - He’s always had a bit of ability this dog, but he’s now joined the Jack Trengove kennel. I thought his run Tuesday was an improved one, behind a flying BOD winner. Bruce ran 16.60 himself and he can maintain those box manners whilst he continues to get stronger, then he’s going to win plenty very soon.

We had a cracking 12 race card lined up on Friday and the racing certainly lived up to the expectations.

One of the most impressive performances of the meeting was the run from Spring Agatha in the 530m final. After drawing box 8, she certainly appeared to have the job against her. Once the boxes opened she speared straight to the front and went like an absolute rocket, leading all the way in a flying 11.89-29.51 and winning by 5 lengths. She doesn’t always show that box speed, but once she lands in front she is impossible to run down.

Tim Richards followed on from his good day at the straight, with another double on Friday. This time it was his two kennel stars that were getting the job done. He’s All Purpose looked like a moral on paper from box 1 in a grade 5, but he still had to get it done, which he did with ease. He found the front very comfortably and zoomed around in 25.18, winning by 7 lengths. He’s On Fire returned to the state for the first time after his Queendsland stint, and showed that he’s potentially come back even better, with a brilliant performance on Friday. Again from box 1, he had the jetpack on early, running 4.89-13.16 to the back, which is as fast as they can go, before clocking in with a 21.91 run. An electric return and if he reproduces that effort every week then he just won’t be losing anytime soon.

Matty Payne picked up another double, which he has certainly been doing quite frequently at the Bridge lately. Aston Tokyo was rewarded for some impressive form, with a 22.33 victory over the short trip. Aston Orazio completed the double, overcoming box 5 to win with a powerful run over the 395, running a handy 22.68.

Dog to follow: Meningie - Showed a lot of promise early in her career, but has been battling injuries since. Her run on Friday was by far her best for a while and it was a real confidence booster for her. She was strung up in a bit of traffic, but smashed the line late, only going down by a length. She will be back on the winners list shortly. 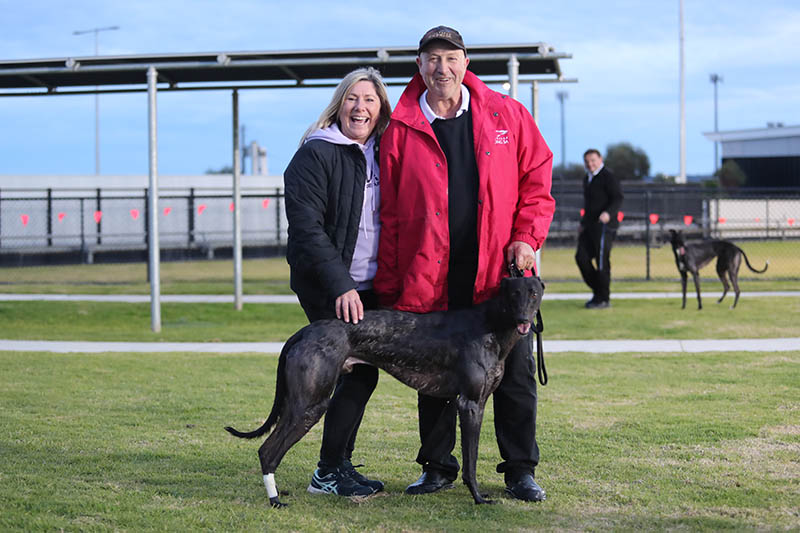