Tonight here at headquarters we have a strong 12 event program with the highlight being three heats of the 2022 Champion Puppy (races 3 to 5). Emily Azzopardi looks to have a strong hand with her four runners spread throughout the heats, as always all races are Trifecta and First Four events.

Race 1 - Spring High Low can kick start the night for us from her good draw of 1, she was a last start winner here from this draw and will be hard to beat again. Terrific Janine can show early pace and is the danger. Fired Up Finn is the form runner winning his three starts since arriving here in SA under the guidance of Clint Trengove. Box Up 1.2.5.7

Race 2 - The Rasmussen duo of Victa Reid and Victa Grosso look the ones to beat here, they are both well drawn and are hard to split. Fabulous Ebony was a last start winner here in 30.50 and is one for the Trifecta punter. Box Up 1.2.4.8

Race 3 - This is the first of the three heats of the Champion Puppy and Melisa Keeping has the good form, she won four on the trot in Melbourne all in  handy times and with her early pace will be hard to beat. Tiffany Keeping along with Emerley Jaguar are right in the mix. Box Up 1.3.4.6

Race 4 - Angus Keeping was a last start winner at Sandown in 29.56, he will take beating with a clear run early on that run. Queen Of Scotch has a good record here, she has been racing well and with her early pace looks a very strong chance. Whiskey Soda can handle her wide draw and must be respected. Box Up 1.4.6.7

Race 5 - This is the last of the heats and the main chances look to be Monique Keeping who has won recently at Geelong and Sandown along with Agent Four who has wins here and Gawler in in her last three, both have early pace and can figure. Add Yarramundi Bee and Rushes Raw for the first four. Box Up 1.2.4.8

Race 6 - Sutton Prince is the likely leader here, if he can skip to the front he might be able to pinch this as he does get tired late. Miers has ability when on song and is well drawn. Burnt Now will be running on from his rail draw. Box Up 2.3.4.5.

Race 7 - This certainly is a wide open affair and I liked the run of Cut The Line at his 1st run here in SA winning up the Murray Bridge Straight, he comes to town here and is sure to be amongst them early. Hushing Dusk was another who showed ability here at her 1st run and she just needs to overcome the wide draw. Box Up 1.6.7.8

Race 8 - Sunset Toxic gets his chance here to break through, he has been racing well of late here in tough company and should be able to find the early lead here. John Dutton is well drawn and is strong along with Springvale Roxy who has been in good form of late here and Gawler. Box Up 1.3.6.7

Race 9 - Jax Bale will take a power of beating again, he was very impressive here 1st up winning in 30.55 and can only go quicker from the good draw. Run Like Jess is a strong type who can run into the placings along with the two McLaren runners who are both drawn out wide. 1 from 4.7.8 boxed.

Race 10 - With only the three runners here Beck’s Monelli will start a very short price favorite, she has been in the money at her four runs here over this trip and should win at skinny odds. Archman will be running on but the small field will help him. New Year Tears has early pace and has won his past two here. For $1(7.5.3)

Race 11 - We are over the 595m here and Spring Lilac has won at both her runs here over this trip, she has the pace to lead and is the one to beat. Powder Finger was placed at his debut at Gawler over the 643m when run down late, he is the danger. Add Locked and Howling Hoss who both are very strong for the minors. Box Up 2.4.6.8

Race 12 - There is a lot of early pace in this but we will stick with Sister Roberta who won here in 30.53 here last week, she should find the rails early. Shall Not has won his last five and is in outstanding form. Aces Are Trumps and Express Speed for the First Four. Box Up 1.4.5.7

The Boy from the Bush gives his selections for tonight’s super night of racing at Angle Park tonight.

There are three $5,150 heats of the 2022 SA Champion Puppy series run tonight at Angle Park, they are races 3, 4 and 5 on the program and are for greyhounds whelped on or after 1st July 2020. The first heat features interstate kennel mates Melissa Keeping and Tiffany Keeping for Emily Azzopardi doing battle with Emerley Jaguar and Audacity. Heat 2 series interstater Angus Keeping lining up against locals Queen Of Scotch and Whiskey Soda. While the final heat also has interstate flavour with Monique Keeping challenging Agent Four and Rushes Raw for a spot in the final next week.
The first two from each heat along with the two fastest thirds will qualify for next Thursdays $14,275 Champion Puppy final with the box draw to be conducted oncourse after the running of race 6.

After the great success of Bedrock Fred in Queensland and Stout Monelli in Victoria over the last few weeks we have another duo crossing the border and matching it with their interstate counterparts.
Both Victa Haydn for Tony Rasmussen and Springvale Max in the care of interstate trainer Jackie Greenough are lining up at the Meadows on Saturday night. Victa Haydn is in race 2 and had drawn box 2 in the first of three heats of the 730m Fireball series. He has been in great form locally so it will be a good test against some of the best stayers in the land. Springvale Max who won the Gawler Produce and Group 3 Howard Ashton with Gavin Harris is engaged in a heat of the Group 1 Maturity. He is in race 10 and has drawn perfectly in box 1 as he loves the rails. With 8 heats only the winners progress so he will need to be at his best.

The GCA National Championships are just around the corner. The National Finals this year will be held at Wentworth Park in NSW and are to be conducted on Saturday, 29th August.
Both the National Sprint and National Distance Finals will carry prizemoney of $75,000 to the winner.
The State series’ for SA will be held at Angle Park on Thursday, 4th August for the Sprint Heats over 530m with the State Final of the Sprint and one-off Final over 730m of the Distance on the 11th August.
In an effort to support this series ALL States will be conducting their Finals on the same night to be run within a two hour period.
• Nominations this year will close at the normal time with GRSA which will be at 9am on Monday, 1st August
A reminder to all trainers of the clause which requires a greyhound to have been domiciled in South Australia for a period of not less than 76 days out of the 150 days immediately prior to the nomination closing date to be eligible to represent SA, which going back is on Wednesday, 18th May 2022. If unsure of a greyhound’s status, please contact the GRSA grading staff.

The National Straight Track Championship this year will be held at Richmond on Saturday morning, 29th August –with the winner receiving $25,000, so all the National Finals will be held on the same day.
This year SA will have two dogs represent the State in the series with QLD, NSW, VIC and SA challenging for the title.
To enable the Straight Track series to align with the circle and the other States our Heats will be held at Murray Bridge on Tuesday, 2nd August with our Final on Tuesday, 9th August. Prizemoney for the SA Straight track Final will be elevated to $10,000 to the winner and align with the other three States.
It is important that trainers are aware that these series’ for the circle and straight track are run at the same time so you need to be aware when nominating and the qualifying criteria.
• Nominations will close at the normal time with GRSA which will be at 9am on Thursday, 28th July
A reminder to all trainers of the clause which requires a greyhound to have been domiciled in South Australia for a period of not less than 76 days out of the 150 days immediately prior to the nomination closing date to be eligible to represent SA, which going back is on Saturday, 14th May 2022. Once again, if unsure of a greyhound’s status, please contact the GRSA grading staff.

305M MASTERS AT MOUNT GAMBIER
Time band for Mount Gambier 305m Masters-
Previously GRSA had been using a policy for Masters events at Mount Gambier utilising the 277m distance, however, we had not adjusted this for the 305m until there was sufficient racing. At the most recent Grading Review Panel meeting it was decided to make the below changes and implement.  The below policy will now be implemented for meetings conducted from 1st July 2022-

305m Masters Policy for Mount Gambier – With Mount Gambier GRC conducting one 305m Grade 5 Masters race each meeting where possible, the Grading Department determined conditions for these races using some of the conditions of normal Grade 5 Masters events, however, factoring in the restricted nature of the 305m distance. If a dog wins and runs faster than 17.75, it can still remain eligible for the next week, if the dog then wins and runs faster than 17.75 again it will be ineligible for the race and distance the following week. The dog will either run over another distance or will miss that week’s race. The following week it will then be eligible. If there is no 305m Masters race the greyhound has to miss the next time that race is conducted. This only refers to the greyhounds that win.

TIME BANDS FOR MASTERS AT ANGLE PARK
Since Angle Park has been redeveloped with the new distances of 342m, 530, 595m and 730m GRSA has not allocated any times for Masters events. There subsequently has been sufficient racing at the venue for a time standard to be applied, which was approved at the most recent Grading Review Panel meeting.
The below time ratings for Masters events will now be implemented for meetings conducted from 1st July, 2022. 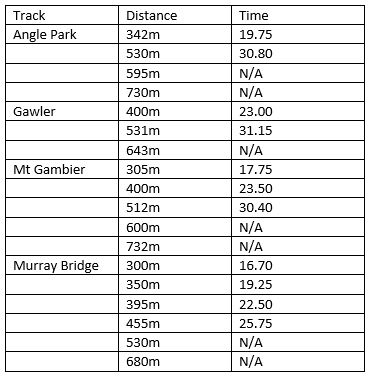 GOTBA at Virginia Coursing dates until the end of their season have been released.
Sunday July 17, August 14, August 28, September 11, September 25 and October 9.